Nutropin is one of many forms of bioidentical human growth hormone therapy available on the American market. All of these forms of HGH are functionally identical, although the ingredients list may differ somewhat. The amino acid sequence in Nutropin AQ is identical to that of naturally occurring growth hormone produced in the human body. Nutropin is created in a laboratory environment using recombinant-DNA technology. As a liquid growth hormone (hGH or GH) formulation, Nutropin AQ is ready for immediate injection; no mixing is necessary. Nutropin AQ makes GH therapy easier by offering these advantages:

Nutropin is also available in the NuSpin prefilled and also allows you to dial your exact dose each time without having to bother with bottles and syringes.

What is Nutropin used for?

Nutropin is used for the treatment of Human Growth Hormone Deficiency in patients of all ages. For patients with low HGH levels, Nutropin can restore youthful hormone balance and improve health and wellness. Nutropin is often used for purposes of performance enhancement and muscle building/fat cutting, but it is vitally important to understand that the use of any form of human growth hormone therapy without a legitimate medical need and a prescription from a licensed and board-certified medical professional.

How to store Nutropin 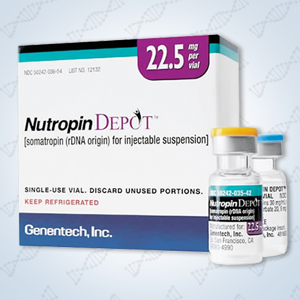 Genetech is often considered the founding company behind biotechnology, pioneering thescience of recombinant DNA technology. The company is headquartered in San Francisco and did $13 billion dollars in revenue in 2011.

What is the proper HGH dosage?