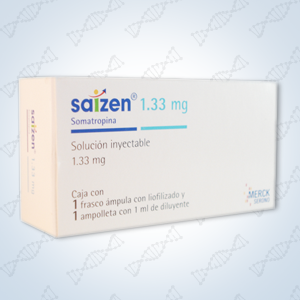 Saizen® (somatropin for injection) is a HGH produced by recombinant DNA technology. Saizen is a product of EDM Serono. Saizen® has 191 amino acid residues and a molecular weight of 22,125 daltons. Its amino acid sequence are identical to the main form of pituitary growth hormone in humans. Saizen® is produced by cells that have been modified by the addition of the HGH gene. Saizen®, with the correct three-dimensional configuration, is secreted directly through the cell membrane into the cell-culture medium for collection and purification. Recombinant DNA technology allows medical scientists to produce human growth hormone that is molecularly and functionally identical to that which is produced by our own body in a safe and sterile laboratory environment.

What is Saizen used for?

Saizen® [somatropin (rDNA origin) for injection] is indicated for the long-term treatment of children with growth failure due to inadequate secretion of growth hormone. Saizen can also be used by adult patients for the treatment of human growth hormone deficiency. Age-related human growth hormone is a medical condition in which the body no longer produces enough growth hormone to meet the metabolic needs of the body, leading to a physiological deterioration which involves weight gain, loss of muscle mass, loss of bone mineral density, depression, and general cognitive decline, just to name a few symptoms.

Saizen is available in two automated delivery devices, the EasyPod, an electronic delivery device and the Cool Click 2 which offers a needle free option for young children and patients that suffer adverse reactions to injections. The Cool Click 2 uses a spring loading mechanism to directly inject the Saizen HGH without the need of a needle.

With roots dating back to the founding of Merck in 1668 EMD Serono is part of the oldest chemical and pharmaceutical company in the world. EMD Serono has over 1,000 employees and is headquartered in Rockland, Massachusetts. EMD Serono’s revenue in 2011 was over $5billion dollars.

What is Jintropin HGH

How do I mix, dose and inject the HGH?